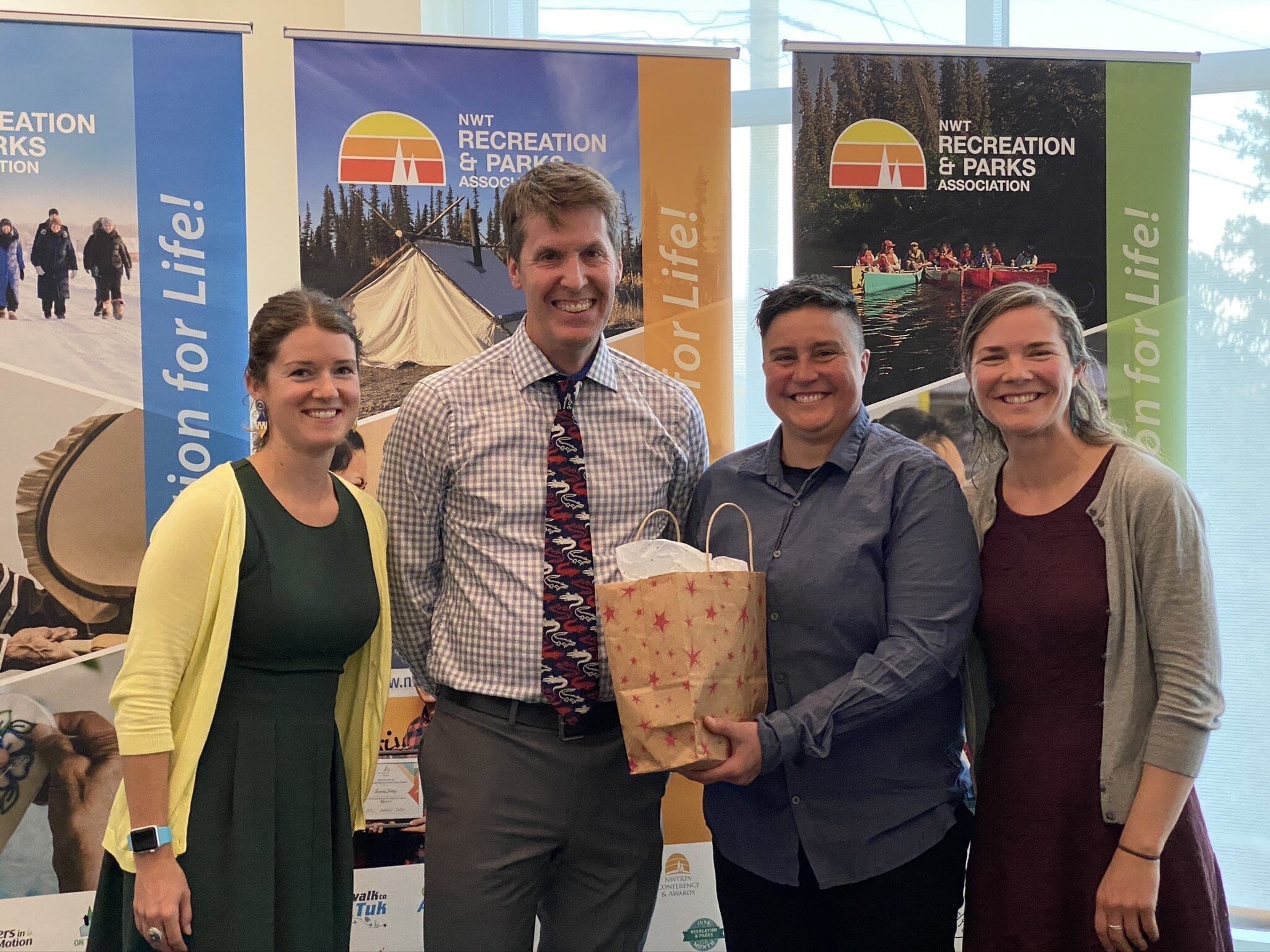 On September 22, 2020, the NWT Recreation and Parks Association presented the 2020 CPRA President’s Award of Distinction to Geoff Ray.

In the winter of 2003, the NWTRPA Board hired Geoff Ray to be the organization’s first full- time Executive Director. Though initially only hired as a one-year maternity leave replacement,  Geoff remained with the organization for 16-and-a-half wonderful years. Under Geoff’s leadership, the NWTRPA grew to seven full-time staff that focus their attention on four key program areas: Active Communities, Professional Development, On the Land Programs, and Membership and Communications. One of Geoff’s best qualities as an administrator is his incredible ability to see the promise and possibilities in people that come into the NWTRPA family, and to actively invest in and nurture their interests and abilities. NWTRPA staff members past and present have valued Geoff’s kindness and compassionate leadership, his mentorship and work ethic, and his efforts to cultivate a supportive and collaborative organizational culture.

While at the helm of the NWTRPA, Geoff oversaw the launch of a number of successful programs, past and present, including Walk to Tuk (formerly the Mackenzie River Walking Challenge), Get Active, the Mackenzie Youth Leadership Trip, and Elders in Motion. During his tenure, many of these programs gained national recognition. In 2007, the Mackenzie Youth Leadership Trip was celebrated with the CPRA Award of Innovation. In 2015, Walk to Tuk was named a Play Exchange Finalist. In 2018, Elders in Motion was celebrated during the Canadian Frailty Network’s Innovation Showcase.

Geoff played a vital role in the pan-territorial team that was named an Arctic Inspiration Prize laureate in 2015 for the Tri-Territorial Recreation Training Program. Recreation North, as it is now known, is the first-of-its-kind pan-territorial recreation partnership. This competency-based, modular recreation leadership training program was designed specifically by and for northerners, though a recent pilot in four provinces is evidence of its relevance for rural and northern communities in other part of the country.

It was under Geoff’s leadership and with his impassioned support that the NWTRPA began an ongoing engagement with the spirit and intent of the work of the Truth and Reconciliation Commission. Geoff advanced this work by seeking out relevant training opportunities for board and staff, centring these commitments in the NWTRPA’s relationships and work, and creating a new staff position dedicated in part to ensuring the organization’s ongoing commitment to decolonization. Geoff has also played an important role in advocating for decolonization and reconciliation with the Canadian Parks and Recreation Association and its member organizations.

Not surprisingly, Geoff has played an important role in shaping recreation at both the territorial and national levels. Elected officials and senior administrators in the GNWT have consistently acknowledged Geoff’s tireless efforts to advance recreation in northern communities, but also to shape how we understand recreation and deliver recreation programming by foregrounding the importance of culture and community. Geoff has been an important advocate for the North at the CPRA, providing a much-needed northern perspective to discussions and decisions. That he always did so in a solution-oriented manner endeared him to the board and staff of the national organization.

Geoff is the best kind of leader. He uses his influence to create space for others to shine. He nurtures the skills, abilities, and leadership of those with whom he works and collaborates.

Geoff has left an indelible mark on recreation in the NWT, the North, and Canada through his work building the capacity of the NWTRPA; by championing innovative and effective programs; and developing and strengthening partnerships with individuals and organizations at the community, territorial, and national level.